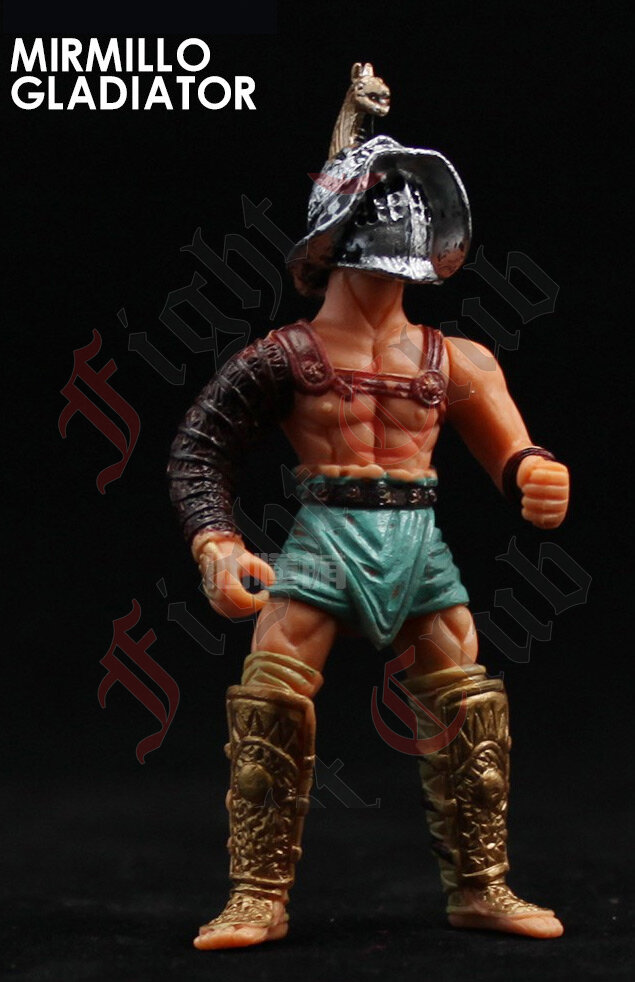 Gladiator Figurines - Collect them all

The murmillo (also sometimes spelled mirmillo or myrmillo, pl. murmillones) was a type of gladiator during the Roman Imperial age. The murmillo-class gladiator was adopted in the early Imperial period to replace the earlier Gallus, named after the warriors of Gaul.

The murmillo usually fought the thraex or hoplomachus, with whom he shared some of the equipment (notably arm guards and all-enclosing helmet, and the dangerous short sword). A number of ancient authors, including Valerius Maximus and Quintillian, assert that he also regularly fought the retiarius. It would certainly have been an unusual pairing, contrasting a slow but heavily armoured gladiator with a fast but lightly equipped one. However, this pairing is disputed; visual depictions of murmillones show them fighting the thraex or hoplomachus rather than the retiarius.

The Murmillo fighting style was suited for men with large muscular arms and strong heavy shoulders needed to help him carry the weight of his shield and sword. Men who played the Murmillo were shorter than most other Gladiators but very muscular. The Murmillo depended on his strength and endurance to survive the battle against foes who were more suited to attacking. The tower shield gave him an edge in defense and his gladius also gave him the ability to thrust and swing at his enemies when in close range. The Murmillo were also trained to kick their enemies with the thick padding worn around their legs.


Figures are approx. 10cm high. There are 6 in the complete set. Weapons not included.

You can collect all 6 of the Gladiators and battle them out in your own arena.

Each item has a stats sheet on the back of the package.

NOTE: These toys have small parts that can be detached. We don't recommend them for children 3 and under.