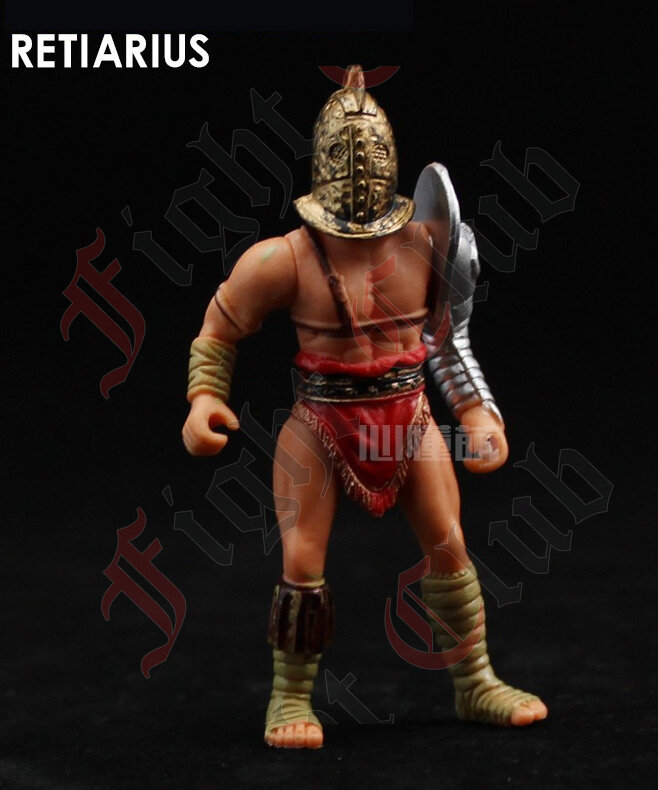 Gladiator Figurines - Collect them all

A retiarius (plural retiarii; literally, "net-man" or "net-fighter" in Latin) was a Roman gladiator who fought with equipment styled on that of a fisherman: a weighted net (rete, hence the name), a three-pointed trident (fuscina or tridens), and a dagger (pugio). The retiarius was lightly armoured, wearing an arm guard (manica) and a shoulder guard (galerus). Typically, his clothing consisted only of a loincloth (subligaculum) held in place by a wide belt, or of a short tunic with light padding. He wore no head protection or footwear.

The retiarius was routinely pitted against a heavily armed secutor. The net-fighter made up for his lack of protective gear by using his speed and agility to avoid his opponent's attacks and waiting for the opportunity to strike. He first tried to throw his net over his rival. If this succeeded, he attacked with his trident while his adversary was entangled. Another tactic was to ensnare his enemy's weapon in the net and pull it out of his grasp, leaving the opponent defenseless. Should the net miss or the secutor grab hold of it, the retiarius likely discarded the weapon, although he might try to collect it back for a second cast. Usually, the retiarius had to rely on his trident and dagger to finish the fight. The trident, as tall as a human being, permitted the gladiator to jab quickly and keep his distance. It was a strong weapon, capable of inflicting piercing wounds on an unprotected skull or limb.

The dagger was the retiarius's final backup should the trident be lost. It was reserved for when close combat or a straight wrestling match had to settle the bout. In some battles, a single retiarius faced two secutores simultaneously. For these situations, the lightly armoured gladiator was placed on a raised platform and given a supply of stones with which to repel his pursuers.


Figures are approx. 10cm high. There are 6 in the complete set. Weapons not included.

You can collect all 6 of the Gladiators and battle them out in your own arena.

Each item has a stats sheet on the back of the package.

NOTE: These toys have small parts that can be detached. We don't recommend them for children 3 and under.